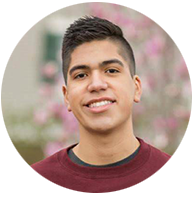 Jorge, Fishers, IN
Attending the University of Chicago

A lot of kids dream of going to college, but I guess I’m too stubborn to be a normal kid. I couldn’t just go for something difficult. I planned to take on nothing short of the impossible. I didn’t just want to go to college. I wanted to go to one of the top universities in the world. Unfortunately, there were just couple things holding me back.

My family emigrated from Mexico to Texas in 2002. To say that my parents were warriors is an understatement, and in retrospect, I suppose I was forced to bear the same grit.

For 14 years, they broke their backs. My father often worked over 70 hours a week, leaving my mother to raise three kids on top of her own job. During the summer, when he worked most, I don’t see him very much, but when I did, he always made sure to tell me, “Estudia m’hijito, para que no tengas que vivir asi.” “Study, son, so you won’t have to live like this.” He made sure I did, too. When I was really young, maybe 4 or 5, he would always come home with math activity books that at the time I was sure had to be the size of encyclopedias. Again, I suppose I was odd, because I didn’t need much convincing. Nonetheless, the only allowance I got was what my dad offered me to complete the activity books from beginning to end. We lived walking-distance from the library, and my mother let that become my amusement park, taking me down there whenever I wanted and letting me check out as many books as I wanted. At the time, my young mind failed to see anything but an opportunity to make some pocket money, count snowmen on a page, and read about the Navy Seals, but my parents had deeper intentions. Because of this, my education and my future came to mean the world to me.

My passion for learning continued into high school, but unfortunately, so did our financial struggles. And it’s not that I thought the colleges I dreamed of were beyond my reach, I just didn’t know – anything. I was a first generation college student, and though my parents supported me the best they could, they didn’t know either. Acceptance rates, letters of recommendation, community service, test scores, GPA, financial aid, not being a citizen –what did all that mean? How important was it? Where could I get in to? Where should I apply? Could I even afford college? I had no idea. But Joe Schiltz did.

I was at the carwash one day when I got call from him. I didn’t know who he was at the time, but he told me that through the QuestBridge Prep Scholarship, I’d earned free advising through CollegePoint. To be quite honest, I didn’t know what to make of it at first. I thought it was more of an email and phone-based Q&A type of thing, but Joe’s dedication was on a whole different level.

It began with a few calls per week in which he’d answer some of the general questions I had. At the time, I wasn’t quite yet aware of the tremendous resource I had at my fingertips.

My main focus was the QuestBridge National College Match, and it was a doozy. But again, Joe was persistent. He would text or email me at least once a day. I never reached out because I didn’t have to. If something was going on in my life or in the college application process, he made it his duty to know about it and help me through it. Before too long, he’d become the most helpful person in my life. There was nothing he didn’t do. He’d ask how I was feeling, if I had any questions, if I wanted to talk on the phone. He’d give me complete break downs on schools, from their academic environment to how my test scores compared. He’d even stay up until almost midnight some nights, after he’d gotten home from work, mind you, just to help me perfect my essays or get ideas flowing. We reviewed my QuestBridge application so many times and in such thorough detail that I could guarantee that not a single period was out of place. He made sure that I was prepared for my interviews and that I knew about every school I was applying to. For every question I had, and I had many, he had detailed and thorough answers. And most importantly, he genuinely cared about me and my future.

In December, I found out that I had been matched to the University of Chicago with a full ride scholarship. He was the reason I had kept that school on my list in the first place, and he was the first person I called to tell. Last year at around this time, I had plans to go to community college and then transfer to state school after two years because that’s what I thought we could afford. That’s what a lot of my friends in similar situations did, and that’s what I thought was in store for me. Thanks to Joe, I’m now going to one of the top universities in the world. College, let alone the college of one’s dreams, is not possible for everyone. Organizations like CollegePoint are working to change that.